Our foundation was established in 1983 by a heterogeneous group of artists and organisers led, then as now, by Roberto Terribile. A group that has always believed in the expressive potential of theatre for children. A language capable of conveying values that are at the basis of a conscientious, respectful and humane civil society.

It is a language that entertains the younger generations – and not only them – and captures their attention, often evoking a distant past only in appearance.

Over the years, through its vast repertoire of children’s theatre shows, the foundation has often anticipated strong social issues such as bullying, integration, diversity, discomfort and food problems, thus investigating the various facets of a changing society.

We have always tackled these contemporary issues with the help of important collaborations such as the one established with: Paola Rodari and Maria Teresa Ferretti (custodians and heirs of Gianni Rodari’s work), GraziellaChiarcossi and Vincenzo Cerami, respectively cousin and pupil of Pier Paolo Pasolini.

The last major “stage” is the direct involvement of PinoCostalunga, a writer and expert in children’s literature and theatre, as artistic director. Costalunga has brought the great wealth of knowledge, experience and his way of doing theatre for children developed with GlossaTeatro to our institution.

Fondazione Aida is also the first theatre organisation in the Veneto region, and therefore also the longest-lived, to be recognised by the Mibact for its theatrical activities dedicated to children in schools, for families, among teachers and educators. A great seal of quality.

Many gazes in a single direction. 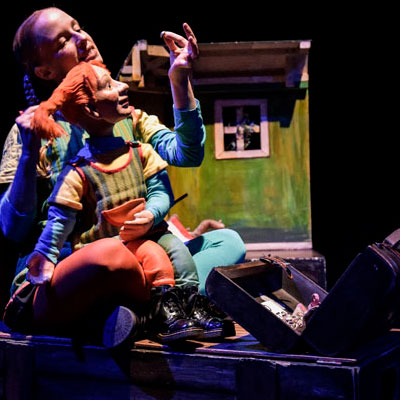 An evergreen by Fondazione Aida, staged with Glossateatro and Papagena (Norrköping – Sweden), which has received the approval of the Lindgren family as well as the AGIS- ETI GOLDEN TICKET PRIZE for its success with the public in the 2007-2008 season. 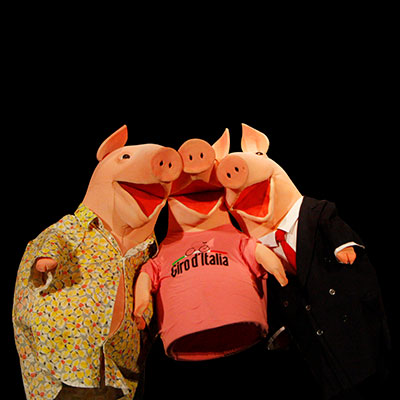 The show is a reinterpretation of the fairy tale known to all with music that goes from light rock to a catchy country style. Its catchy melodies involve children and project the older ones in a joyful atmosphere. 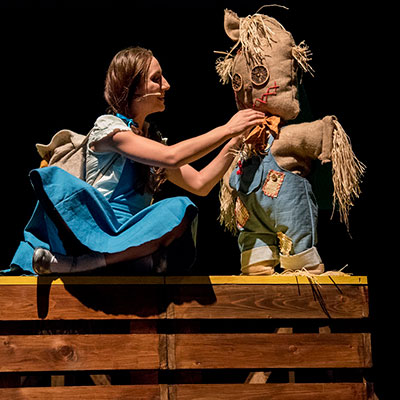 The Wizard of Oz

One of the most beautiful fairy tales for children, taken from the famous story by L. Frank Baum which retains its charm intact over time. A wonderful journey, in that dangerous and tortuous path that is growing up, becoming great. It definitely takes brain, heart and courage!

From the story of the same name by Rudyard Kipling, a show made of extraordinary adventures and friendships set in the jungle, a metaphor for the world. 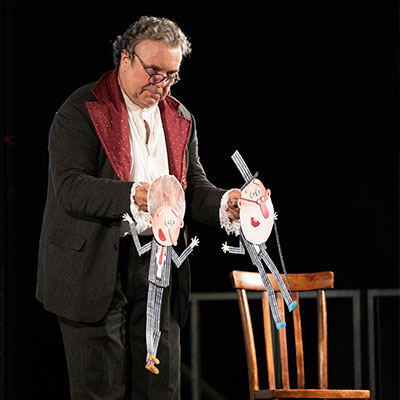 Baron Lamberto was there twice

Curated by Pino Costalunga and Silvia Bonanni. Taken from the homonymous book by Gianni Rodari 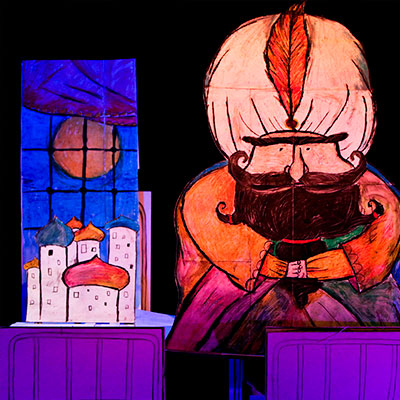 The trips to the moon, two of them, and the one to Russia, where a horse can be found hanging from a bell tower, are just some of the numerous adventures of the Baron of Münchhausen, the only one able to fly on cannonballs. 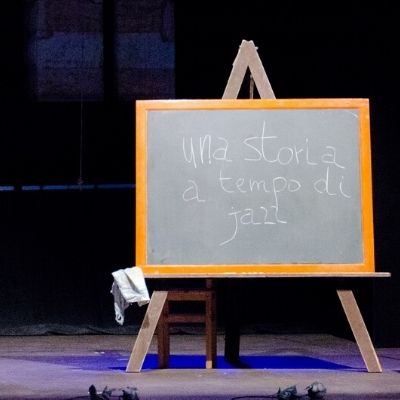 A story in the rhythm of Jazz

Is it possible to tell jazz to children like telling a story or reading a nursery rhyme? Of course it is, and to do that we will use words and music. 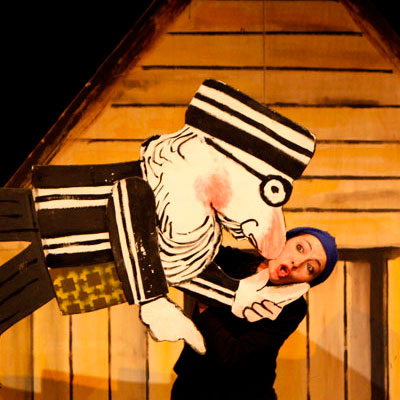 Peter and the wolf 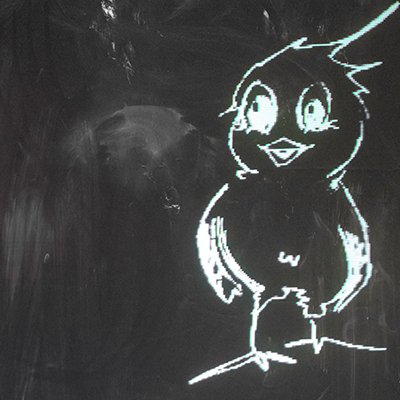 The show is inspired by the book of the same name by Mario Lodi, a revolutionary teacher and creator, together with his children, of a complex story that describes the joyful but difficult aspects of growing up. A small animated picture where fairy tale images linked to the world of nature are mixed with interactive effects with the public. 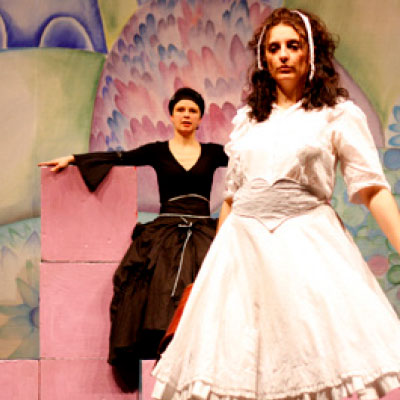 Alice and the Rights of Wonderland

Alice and the Rights of Wonderland is a show that will make both children and adults think. Through the characters of the famous novel, the theme of children’s rights will be discussed. Text inspired by “The Big Book of Children’s Rights” by Amnesty International. 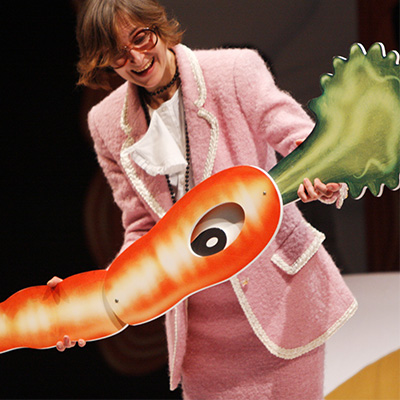 An invitation to a healthy diet for a harmonious growth, using the tools of the theatre, which involves the young spectators with the cheerfulness, fun and emotions that are typical of it. 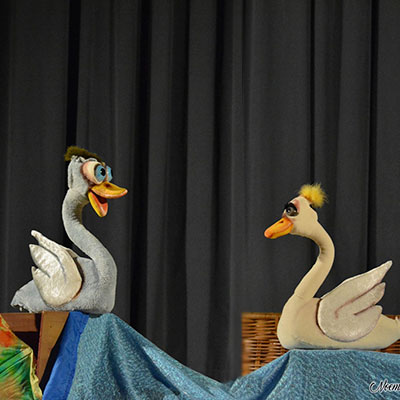 Based on the famous fairy tale The Ugly Duckling by the Danish author Hans Christian Andersen, which contains a striking element of topicality: the discriminated diversity. On stage three strange characters all somehow a bit “ugly” and a bit “different” and perhaps for this reason they have the bad habit of teasing others. 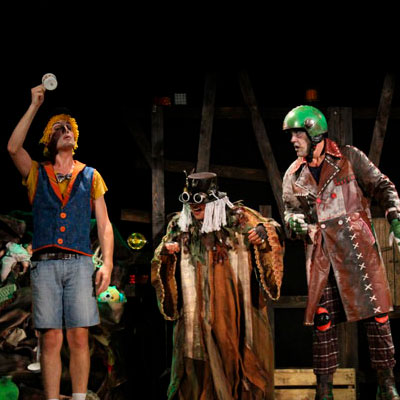 But why does everyone call me Frankenstein?

The show is freely adapted from the famous novel by Mary Shelley and deals with important themes such as tolerance, marginality and love. Small acts of great comedy inspired by the commedia dell’arte and the clown make this an entertaining proposal suitable for different age groups. 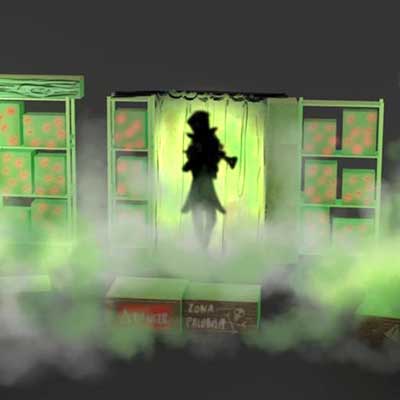 Freely based on a legend set in the 13th century during a pandemic.
A co-production with Febo Teatro, set up as part of the “A casa nostra” project. 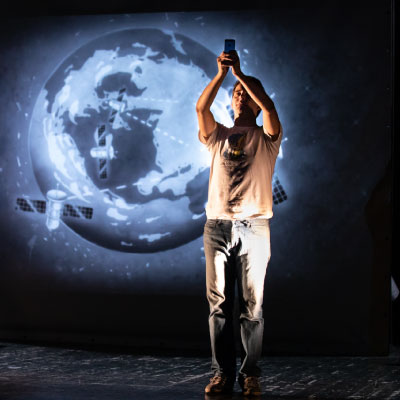 Put that mobile phone away

Based on the book of the same name by Aldo Cazzullo, journalist and writer for the Corriere Della Sera, the show is aimed at children and all young people, inviting them not to confuse virtual life with real life. 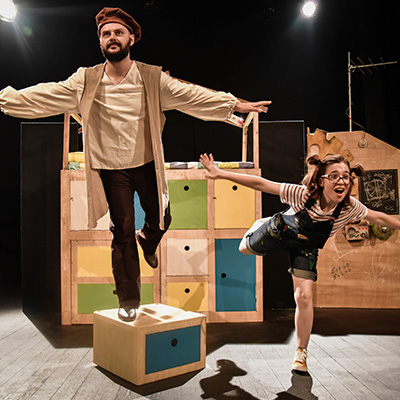 A show dedicated to the genius of Leonardo da Vinci. A magical adventure to make children reflect on how precious study, exploration and interest in nature are, through songs, inventions, a ballet, a puppet, two actors, theatre and lots of magic! 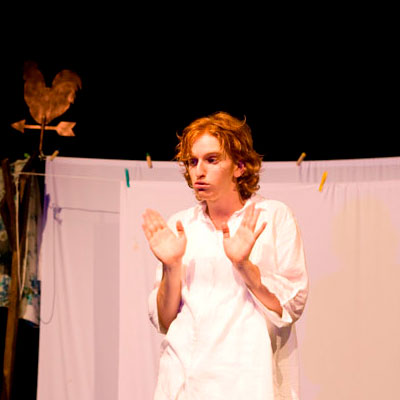 The four seasons and little wind

Based on “The four seasons” by Chiara Carminati and illustrated by PiaValentinis, both Andersen Prize winners, and music by Antonio Vivaldi, the show is a journey on the wings of music, between words and images, to lead children to discover the seasons through listening to the musical story.
The show is the winner of the prestigious “Briciole di fiaba 2012” award. 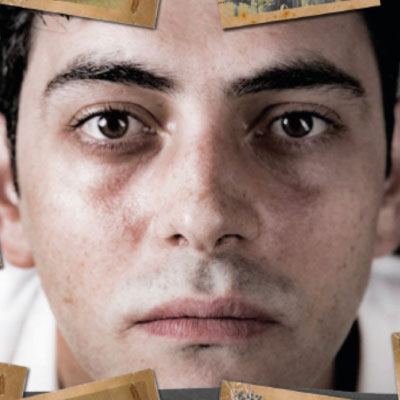 The Secret of the Invincibles

The Secret of the Invincibles tells the story of one of the darkest periods in Italian and European history, that of the Nazi-Fascist madness during the Second World War, through the unique story of ErnőErbstein, first a footballer and then a coach, who was able to create the myth of one of the football teams that every Italian has in his heart: Grande Torino. 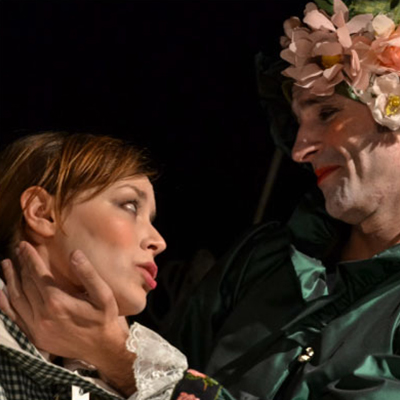 A play based on the novel of the same name by Vamba (Luigi Bertelli), where children’s vitality and purity clash with a world of adults more focused on personal interests and undoubtedly more hypocritical. 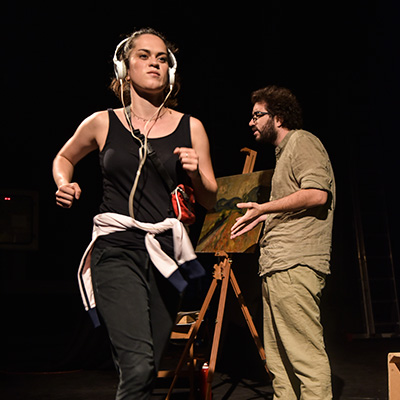 A show freely inspired by the Charter of the Rights of the Child, born within the European project Rights4Kids. 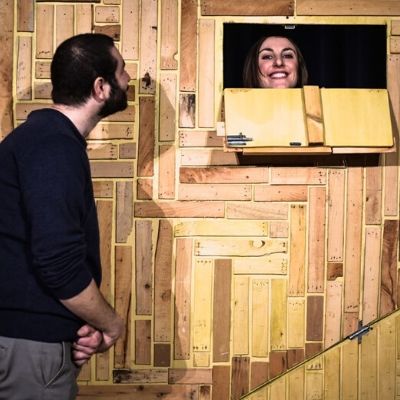 A show based on the great classic “The Diary of Anne Frank” that deals with one of the darkest periods of world history: the Nazi-fascist madness and racism during the Second World War. Through Anne’s story, the director, Selene Farinelli, intends to give a message of hope to the young audience, inviting them to still trust in the humanity of people as the young protagonist believed, despite everything. 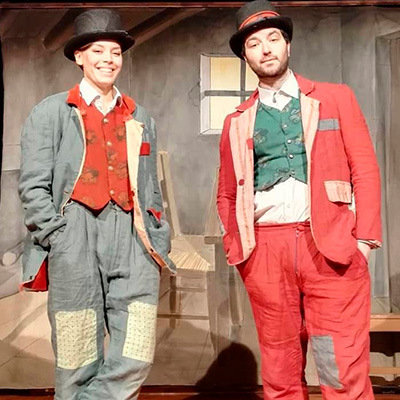 Two actors, with two suitcases and two noses, are firmly determined to tell the story of the puppet Pinocchio by themselves. Immediately they begin to quarrel, nose to nose, about who will have to tell it and who will play the part of Pinocchio. 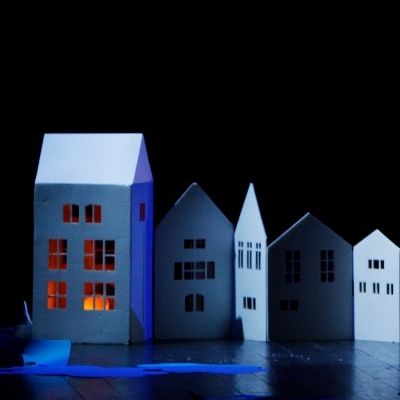 An adventure made of paper and carboard in the name of friendship. 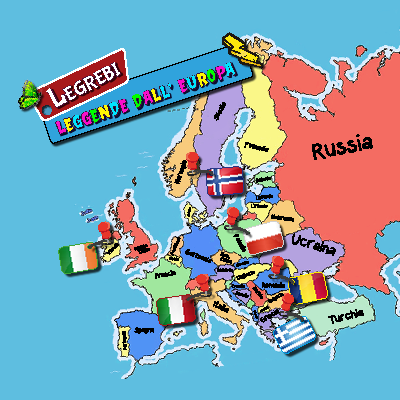 And so the world was born LEGREBI Legends from Europe

A traveling show in stages to discover the myths about the creation of the world. 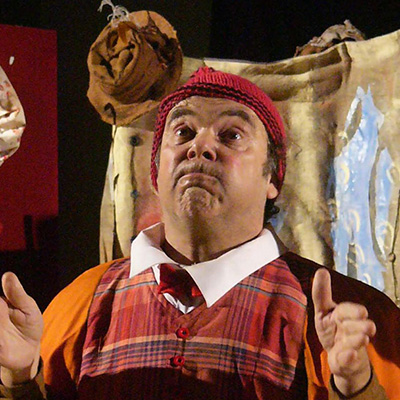 Little Thumblingis not afraid of the Ogre 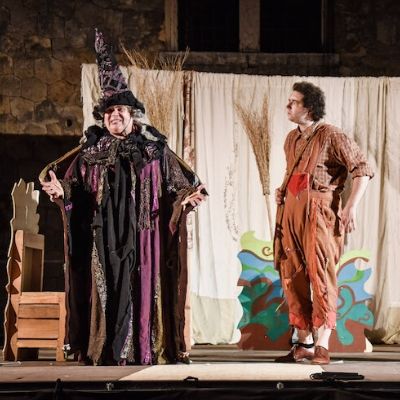 Hansel and Gretel and the poor witch

An interesting reinterpretation of the German fairy tale reported by the Brothers Grimm. 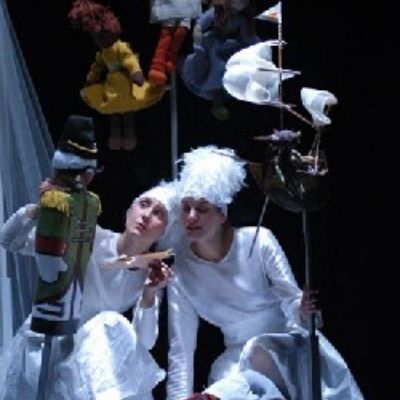 A show inspired by the text by Gianni Rodari. A Christmas story that will make you dream. Will the children be able to receive the gifts from the Befana? Find out with us!