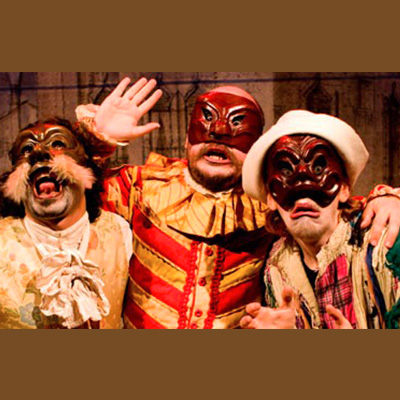 After a positive experience in 2009 that involved more than 5000 people, the third tour in Oceania for Fondazione Aida starts the 13th July 2010. An experience that will end the 5 September after a tour rich of shows for children, families and adults.

The tour starts on the Sunshine Coast and then moves on to Lismore, Stanthorpe, Gold Coast, Newcastle, Canberra, Sydney and Melbourne. The shows presented are: Il Segreto di Arlecchino (Harlequin’s Secret), a Commedia dell’Arte show; Il Principe Felice (The Happy Prince) from Oscar Wilde, Casa di Fiori, casa di Stelle (House of Flowers, House of Stars) from the work by Beni Montresor; Pierino e il Lupo (Peter and the Wolf), with the narrating voice of Dario Fo, and Monnezza – Le foglie di Pasolini (Pasolini’s Leaves, Shining Trashes), a tribute to the director and writer on the 25th anniversary of his death, which will debut during this tour.

In particular in Melbourne, from 26 August to 4 September, an important collaboration with LAMAMA Theatre foresees the realisation of the shows “Pasolini’s Leaves, Shining Trashes” and “Peter and the Wolf”.

Two workshops on Commedia dell’Arte and the Use of Masks will complete the 2010 project. An important opportunity for discussion between the artistic cast and the audience on the peculiarities of Commedia dell’Arte, a theatrical genre spread through five centuries and based on improvisation.

All the shows will be staged thanks to a cast coordinated by Roberto Terribile, artistic director, and actors Lorenzo Bassotto, Monica Ceccardi, Roberto Macchi and Marco Zoppello, and by technician Claudio Modugno.