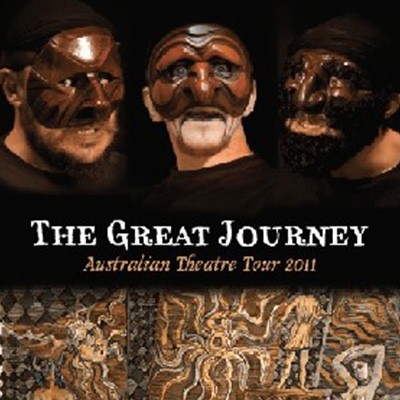 From the 22 August to the 26 September 2011, we returned with the Australian tour. The project was made possible thanks to meetings with the Italian-Australian associations over the past five years. In particular, there was a focus on the 150th anniversary of the Unification of Italy. In this regard, a reading was presented that aims to highlight the importance of the role and contribution made by Italian emigrant communities all over the world.

The programme included about 40 performances and workshops held in the main Australian cities and areas: Sunshine Coast, Newcastle, Melbourne, Canberra, Lismore and Sydney.

The shows offered are: Il Grande Viaggio, a Commedia dell’Arte show loosely based on Johan Padan a la descoverta de le Americhe by Dario Fo and Pinocchio – Viaggio Tragicomico per nasi. The Happy Prince by Oscar Wilde, Casa di Fiori, Casa di Stelle based on the play by Beni Montresor,.

Two workshops on Commedia dell’Arte and the use of masks completed the project, providing an important opportunity for discussion between the artistic cast and the audience. Were in fact discussed the peculiarities of this theatrical genre, spread over five centuries and based on improvisation.

All the performances were staged thanks to a cast composed of Roberto Terribile, artistic director, actors Lorenzo Bassotto, Roberto Macchi and Marco Zoppello, and technician Claudio Modugno.