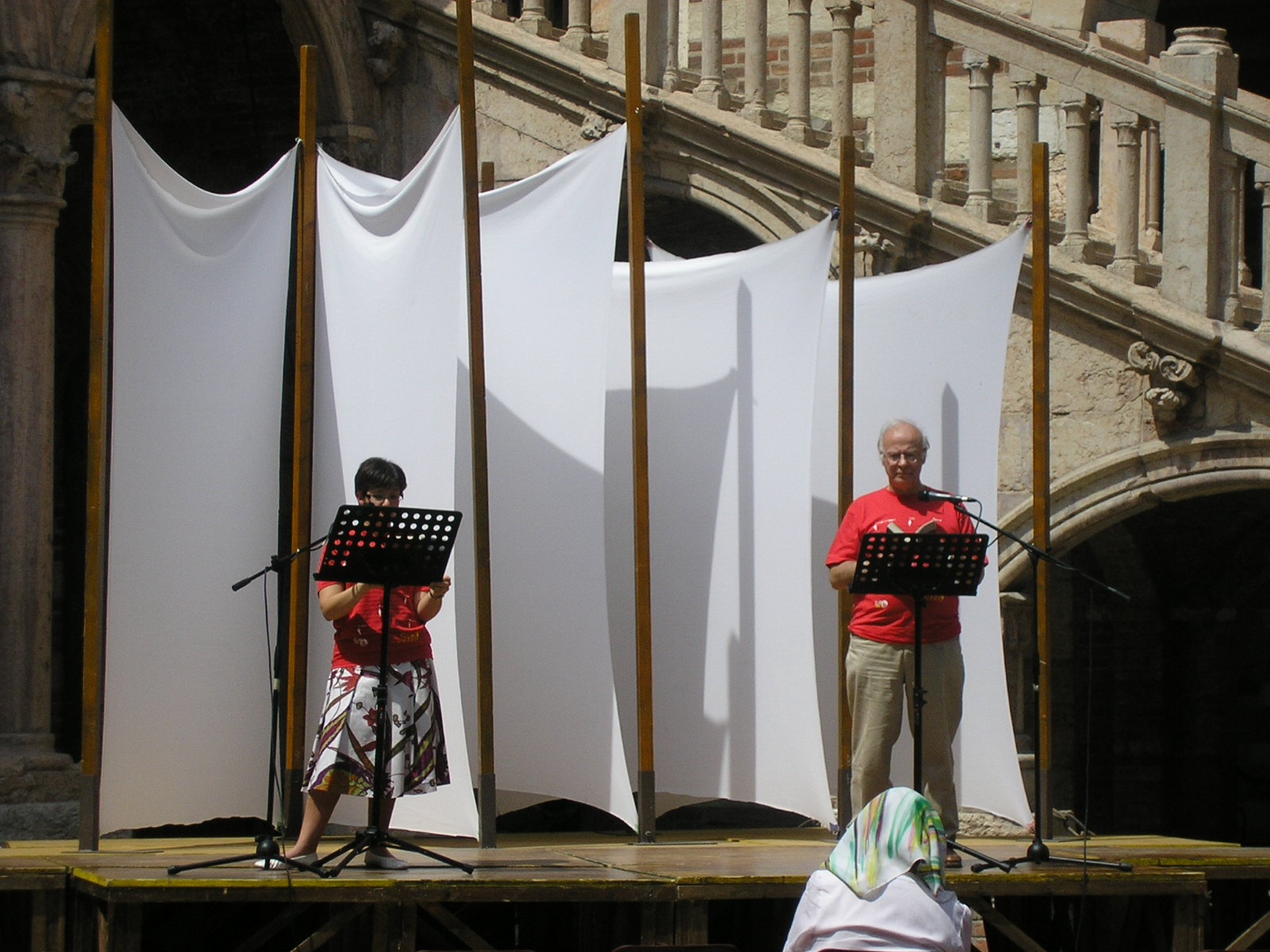 On the 9th May 2007, on the occasion of the Europe Day, the European Literary Marathon was held in the Cortile Mercato Vecchio in Verona and at the same time in the Casa di Reclusione di Isili in Cagliari and in seven other European cities. This project aims to enhance the European literary heritage, highlighting both its richness and the aspects common to all national literatures.

An initiative born from an idea of Prof. Mario Allegri, Professor of Italian Literature at the Faculty of Letters and Philosophy of the University of Verona and member of the scientific committee of Fondazione Aida.

The marathon in Italy involves the full reading of Italo Svevo’s novel La coscienza di Zeno. One of the most European writers, starting from his own biography, in which different and sometimes distant cultures intersect and merge, arriving at his novel, the most significant of the entire Italian Novecento.

Participants from Cagliari included: prisoners, police and prison educators, the director of the prison. Some representatives of the Ministry of Justice also took part in the project.

During the marathon in Verona, moments of conviviality were shared thanks to the polyphonic concert by the Choir of the Liceo Scientifico Fracastoro, directed by Rhonda Moore.

This was followed by a sporting moment with the literary relay (from Via Italo Svevo to Cortile Mercato Vecchio).

The European Literary Marathon thus offered the opportunity for citizens from different countries to get involved, making them the protagonists of a unique European event. All marathons were dedicated to the reading of a masterpiece of the Novecento literature that was particularly significant for the culture of each country.

The marathons will take place simultaneously in the European countries:

Bulgaria 12.00 – 19.00 in Sliven at the “Stefan Kirov” Theatre reading of the novel The Bowler Hat by Yordan Radichkov

Finland 11:00 – 20:00 in Järvenpää at the Municipal Library reading of Rautatie (Railroad), by Juhani Aho

Greece 12:00 – 10:00 p.m. in Athens at the “Athinais” Cultural Centre in Votanikos reading of the 154 poems collected in the anthology The Canon , a collection of works published during Kavafis’ lifetime

Poland 10 a.m. – 6 p.m. in Cracow at the Regional Public Library of Cracow reading of texts from the works: The Green Goose Theatre by Konstanty Ildefons Gaczyski; The Second Killing of a Dog by Marek Hasko, The Adventures of Sindbad the Sailor by Bolesaw Lemian

Romania 12:00 – 8:00 p.m. in Bucharest at the ROR National Radio Romania reading of Pe Strada Mântuleasa (The Old Man and the Civil Servant) by Mircea Eliade

United Kingdom 12.00 – 21.00 noon in York at Ruins Crafthouse reading of a selection of early texts and poems and plays from The English Auden and The Age of Anxiety